Startpage - Finkenherd 5
Cookies facilitate the provision of our services. By using our services you agree that we use cookies. Further information: Data Protection 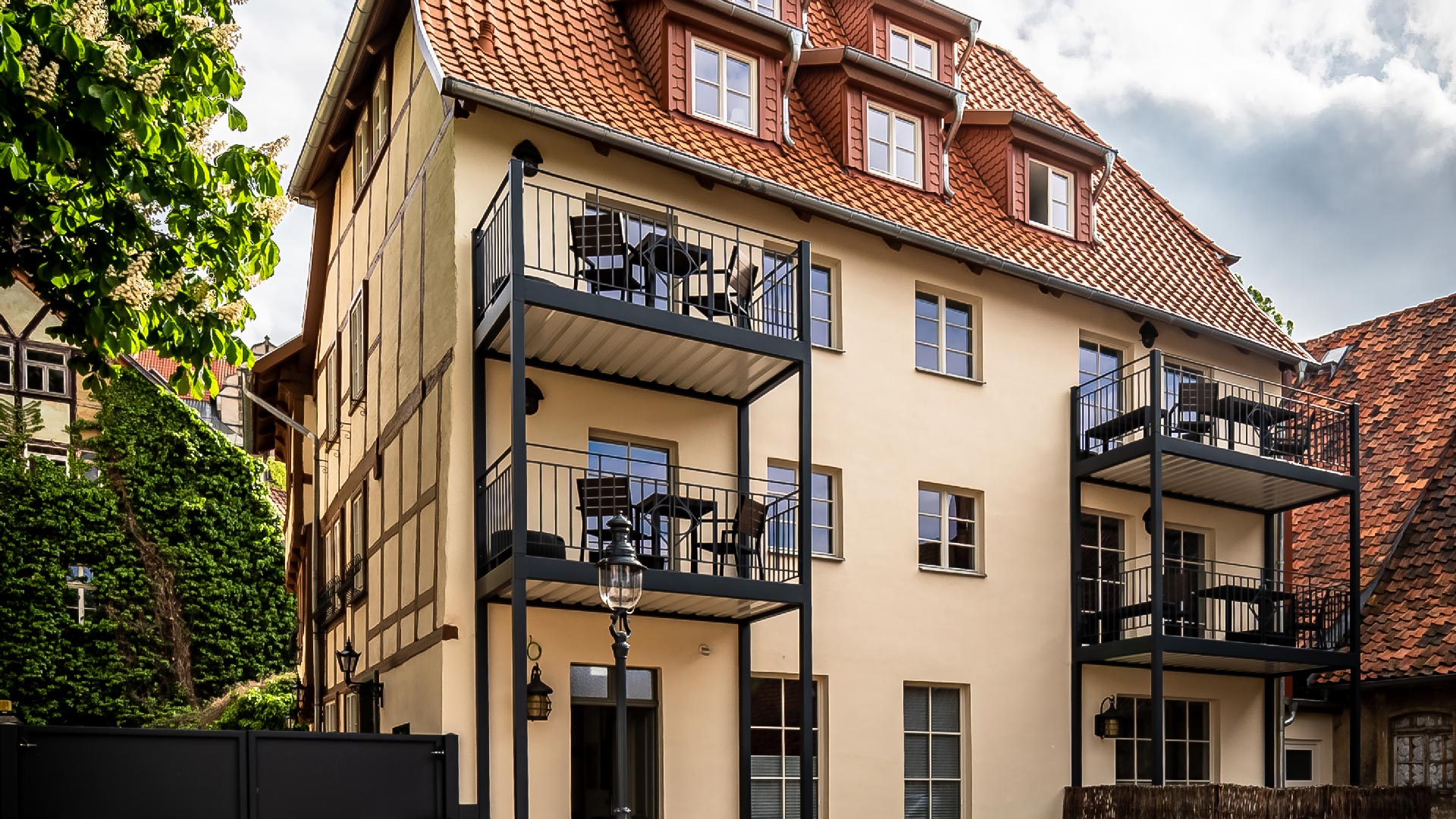 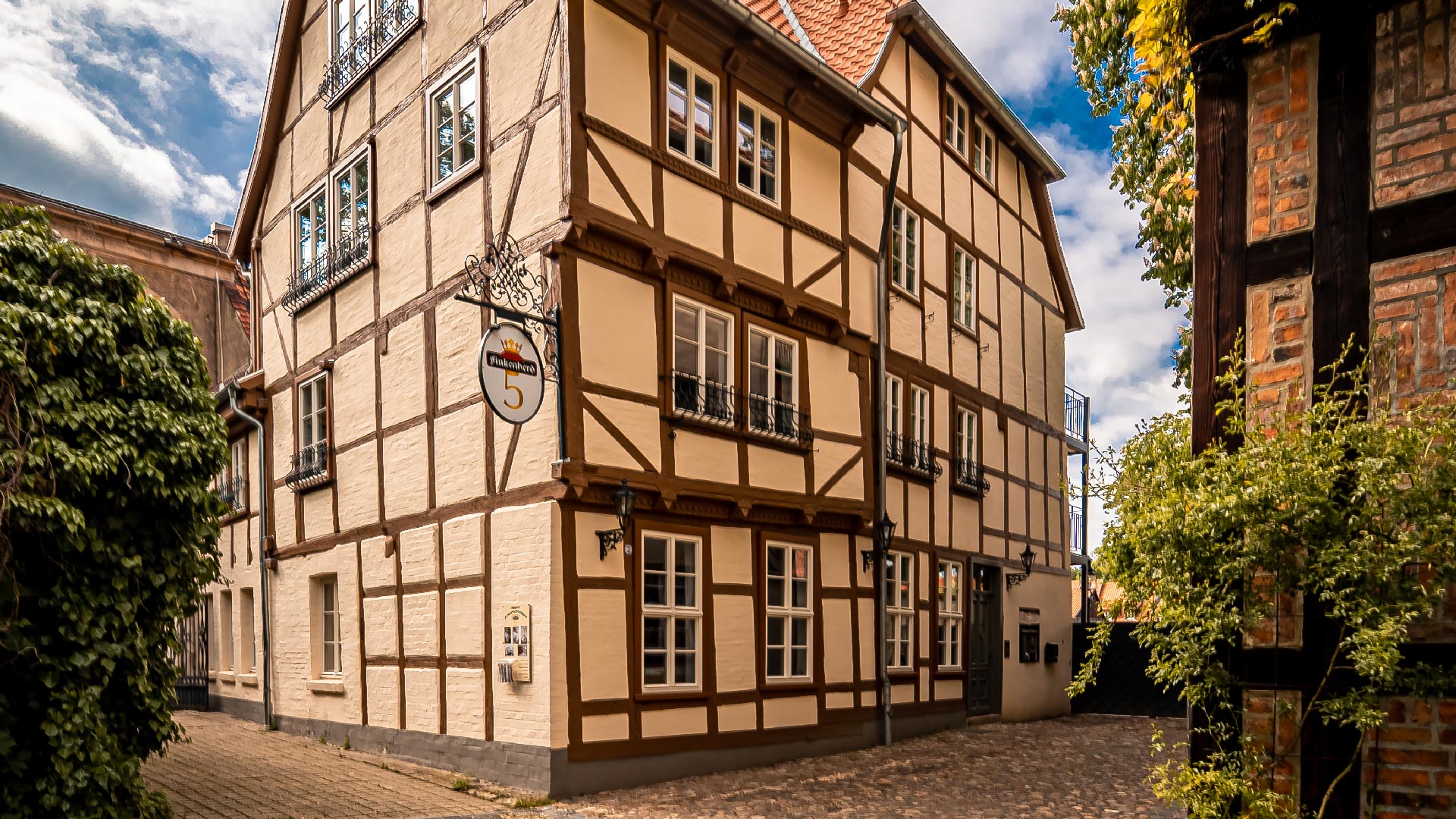 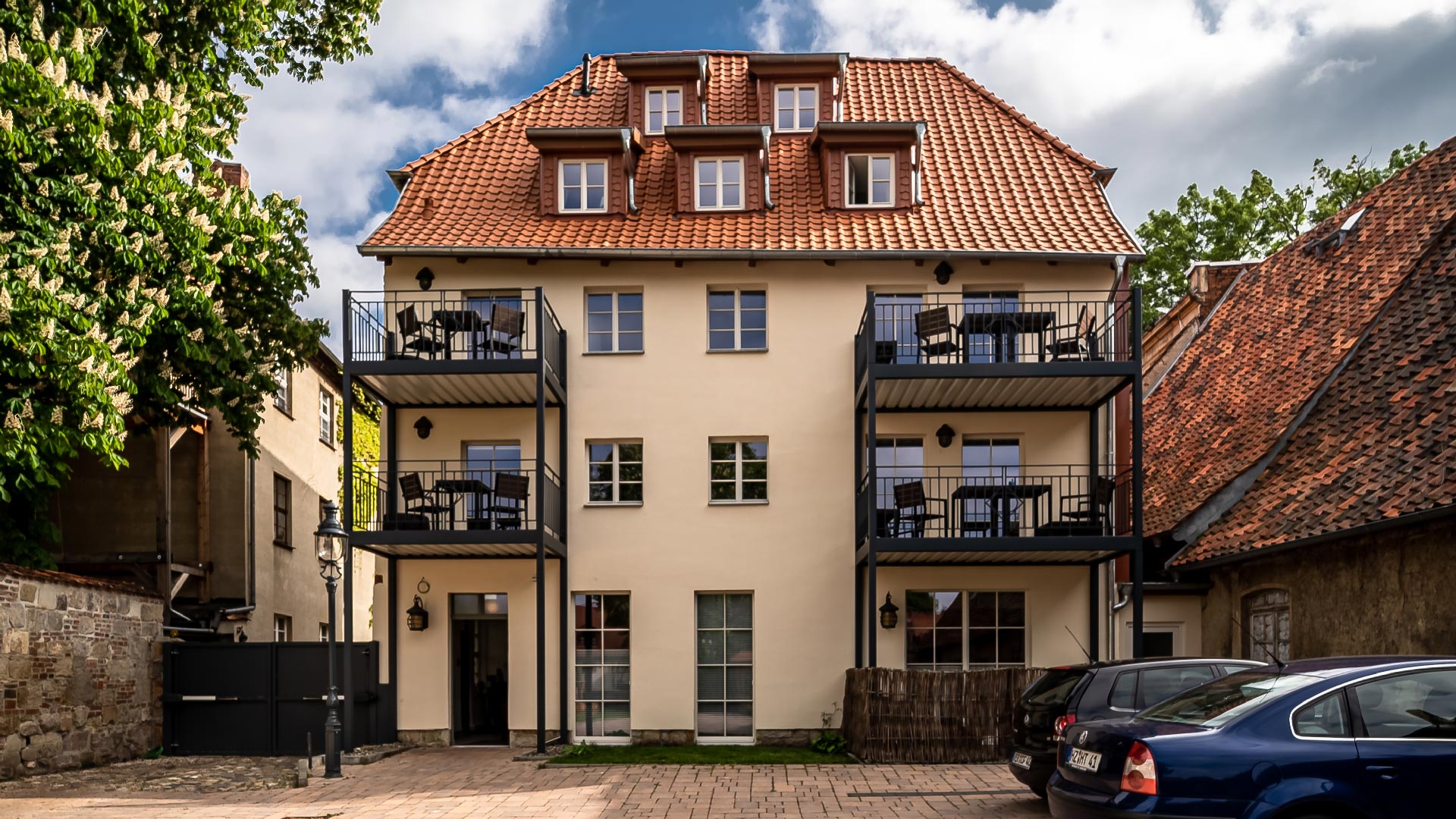 Our beautiful half-timbered house "Finkenherd 5" with its nine exclusive and cozy holiday apartments offers the ideal starting point to explore the Harz region. As a monument protected building Finkenherd 5 is located in the middle of the old town of Quedlinburg. The city in the north of the Harz region is more than 1000 years old. The old town of Quedlinburg is listed as a UNESCO World Heritage Site since 1994. Regional products from the Harz area can be enjoyed in numerous cafes and restaurants close to our self-catering apartments.

Comfortable holiday in a wonderful apartment!

The apartment “Osterlinde” is very well equipped and very clean. The location in the old town is fantastic, all around are nice cafes and restaurants. The beds are comfortable and the silence in the middle of the city awesome. Nice balcony and elevator available. The key handover is perfectly organized! We felt very comfortable and will come back for sure! PS: Our car has never been parked so safe in a spacious, clean backyard.

Our expectations have been exceeded

The location of the accommodation is a real dream. It’s hard to get even closer to the old town. It was very quiet and it is only a stone’s throw to the castle, where you can treat yourself to a very tasty cheesecake on the way. The accommodation offers everything you can think of (kitchen, furnishings, ambience) and has been lovingly furnished. Price/Performance is top!

Extraordinary The apartment has exceeded our expectations. It was clean, tidy and also really stylishly decorated with a mix of old and modern furniture. Simple check-in, unpack things and feel good. In addition, the location in the middle of the old town of Quedlinburg is definitely unbeatable. Parking facilities are available directly at the apartment. Absolutely recommendable.

Lovely restored apartment in a beautiful half-timbered house in the middle of the old town. Everything we needed was there and we felt very comfortable. Check in was absolutely trouble-free. Clear recommendation for Quedlinburg!

Very nice apartment in a lovely restored half-timbered house. The apartment is furnished with everything you need. Very clean and high quality. Very friendly and nice hosts. Here, the well-being of the guest is still at the top! We would love to come back again....

We will be back for sure!

The whole building is just beautiful! The location in the middle of the old town, the view to the castle, the renovated house that is furnished with so much attention to detail. So, we can say: Everything is top! A very clear recommendation!

An absolutely great stay Every little detail in the accommodation has been thought of, from a detailed attention to a great accommodation interior to the coupon booklet for a free use of the public transport. Simply the small things. Also a great furniture from old and modern times, true to the style of the city. Everything you needed was available in the accommodation. A special highlight: the sauna, which we even had one evening completely to ourselves, with a great view to the castle!

It was a wonderful getaway in a top apartment in the beautiful city of Quedlinburg. The accommodation left nothing to be desired, perfect payment process, then the key system released the key. Beautifully restored apartments with all comforts in the old town, comfortable parking in the backyard, all sights within walking distance. We didn’t want to leave at all. We will come back for sure. Many thanks to the host and his team, who arranged everything so lovingly. Our daughter with family will also be visiting you in the future.

100% recommended! A very elegant and lovely furnished apartment in a beautiful half-timbered house in a perfect location in Quedlinburg. The apartments have everything you need for a pleasant stay. n the balcony you can relax well after a day of hiking or a city tour, restaurants for all tastes are within walking distance. We felt very comfortable and would come back anytime.

Wonderful comfortable half-timbered location in the heart of Quedlinburg The house is beautifully renovated, combines historical ambience and comfort and is very quiet and centrally located in one of the most beautiful corners of Quedlinburg. We had the spacious apartment number 9, generous and with a view of the castle. Very comfortable beds, impeccable equipment, and if we were too lazy after a long hike, climbing the stairs up to the 3rd floor, we could comfortably take the elevator. In addition, there was also a sauna and a very large TV screen.

Discover all of our great accommodations!

You can relax directly here

There are some experiences waiting for you!

A sauna with adjacent relaxing area is available free of charge to all guests in the attic of Finkenherd 5. From here you can enjoy the direct view of the castle and the old castle hill (Schlossberg) of Quedlinburg. During your stay you can use the free parking in our fenced backyard.

At any time of the day and night you can comfortably access the secure parking through an automatic gate. In the quiet courtyard you will also find a cozy sitting area that can be used by all guests of the house. Not everything is always predictable. Therefore, the relaxation begins with the arrival to the Finkenherd 5. We offer you a time-flexible and contactless check-in option with a direct key issuing at the building.

Our holiday home is located in the historic old town of Quedlinburg.

In the next section you will learn more about your travel options.

Arrival to your holiday apartment Finkenherd 5 in Quedlinburg

Whether by car or alternatively by public transport: There are various options available to you for your journey to Finkenherd 5 in Quedlinburg. You can enjoy full time flexibility thanks to our contactless check-in. Relaxation is guaranteed already during the journey. On site, the Harzer Urlaub-Ticket (HATIX) guarantees you free mobility throughout the Harz.

Arrival by bus and train

The train station of Quedlinburg is located about 850 meters from the market square, the centre of Quedlinburg. The shortest route from Finkenherd 5 to the train station is via Carl-Ritter-Straße and Bahnhofstraße and takes about 16 minutes on foot (1.3 km). You can also reach the train station with the city bus line 206, the nearest bus stop is on Kaiser-Otto-Straße, just a 5-minute walk from Finkenherd 5. By bus you can travel within Quedlinburg and to the surrounding towns, the timetables of the regional public transport (HVB) can be found online. The city of Quedlinburg offers you different ways for your arrival and depart. With the coach “FlixBus” you can travel daily from Berlin directly to Quedlinburg.Direct train connections from Magdeburg to Quedlinburg are available every hour, the timetables are available on the Abellio or Deutsche Bahn website. Furthermore, you can take the Harz-Berlin-Express directly from Berlin via Potsdam, Magdeburg and Halberstadt to Quedlinburg and back on weekends and national holidays. From the station you can take the historic narrow-gauge railway “Harzer Schmalspurbahn” to the highest mountain of the Harz area, the Brocken. By different taxi services you can also get from place to place.

The Harzer Urlaubs-Ticket is a special offer, which you can use for free during your holiday in the Harz region. It allows you to travel freely on all public bus and tram lines in the district of Harz as well as on selected lines in the district of Mansfeld-Südharz and in the districts of Goslar and Göttingen in Lower Saxony. You can easily get your ticket when you stay overnight and pay the current guest fee (in participating locations in the Harz region), including Quedlinburg. Upon arrival and payment, you will receive a ticket booklet with an integrated registration slip/guest card, these two components form your Harzer Urlaubs-Ticket (HATIX). You can use the HATIX free of charge from registration (arrival date) up to and including the day of your departure. Further information on the functioning and validity of the HATIX is available at the following link: (https://www.hatix.info/en/)

The Finkenherd, which directly adjoins the castle square in Quedlinburg, is a legendary place. It is said that in 918 the royal crown of the Eastern France Empire has been offered here to the Saxon Archbishop Henry, who was currently bird-catching. The picturesque squares are lined with some half-timbered houses built in very early eras, which are surmounted by the nearby Quedlinburg Castle and the collegiate church of St. Servatii.

Cultural highlights such as the Lyonel Feininger Gallery, the museum of Klopstock, the Castle Museum of Quedlinburg and the museum of the history of the half-timbered buildings “Ständerbau” can be reached within a few minutes' walk from Finkenherd 5.